Fusion rockets are the main (read: only) method of spaceflight propulsion in this universe.

Every 'modern' (in-universe) fusion rocket drive uses an Aneutronic type of fusion, which releases charged particles as its exhaust/thrust energy, in the form of protons and/or alpha particles. This solves the problem that results from nuclear fusion reactions releasing uncharged neutrons as exhaust: uncharged neutrons can cause ionizing damage (has enough energy to knock neutrons off of atoms, causing them to ionize) and can make materials radioactive, among other things which makes it necessary to have heavy biological shielding, remote handling, and other safety mechanisms.

Aneutronic fusion engines also make it easier to power ships' systems directly from the fusion reactor, instead of another power source, since these engines release charged particles, which are easier to convert into electricity.

Advanced in Technology to Make this Possible[]

First, extremely high-level heat shielding is needed, likely offsetting any lightness gain from the lessened need for thicker structures and more shielding due to being aneutronic. In fact, net mass might even be marginally larger. However, you get hugely more powerful engines for all that, and no need for heavy alternate power sources for other ship functions (such as Cryosleep).

In addition, the Lawson criterion for containment on p-11B and D-3He reactions is much higher: density, which is 45x higher, and pressure, which is 500x higher. Also, if we want to prevent loss of energy through bremsstrahlung radiation, the magnetic systems need to be even stronger (in order to allow the plasma to reabsorb that radiation): the Lawson criterion has to be 6x stronger than it would be, so that the magnets would need to be 3000x stronger than our state of the art.

The state of the art most powerful magnet ever made is 45 Tesla. To calculate the force produced by a field of this strength at two meters distance, use: 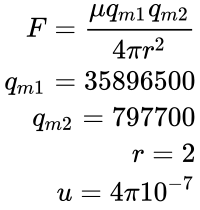 This assumes that these magnetic fields are small enough to be classically represented as points, but that's fine for this.

Now, Ceremony Universe magnets are roughly 3000x as powerful for their average industrial ship-allocated magnet (for instance, used for the reactors mentioned above). Thus, at earthlike gravity and two meters of distance, a CU magnetic field can levitate 263,034 tons. A normal naval destroyer in our time weighs 9,200 tons, and with the Fatuum Malus IV (for instance) at roughly double that length, but lighter materials, we could estimate a CU destroyer weighing about 18400 tons.

Types of Rockets in Use[]

Are much faster, but require more fuel and Helium-3, which is difficult to create artificially and rare to mine. Thus, these ships are far more expensive to run, because they require more fuel, and more expensive fuel. This might be compared to having a Ferrari or another extremely high-performance car. These types of ships were largely abandoned after the Expansion Era, as people realized just how impractical they were. There are a few that are still in use, mostly for intra-solar-system flight (generally slavers and pirates), but most were converted to p-11B or dismantled, and no new ships of this type were ever produced.

Generally, Helium-3 is still mined for on-planet D-He3 reactors that power weapons systems or cities, and large stockpiles of unused Helium-3, mined during the height of the Expansion Era, remain on Terra.

Boron-11 is much more readily available but less efficient, meaning that the resulting ships are both slower and require more complex non-tokamak reactor designs (including dual-laser systems) that make the ship more prone to breaking and larger in either size or mass or both.

Community content is available under CC-BY-SA unless otherwise noted.
Advertisement